The first,
Green Hills is out of the closet regarding their wholly owned subsidiaries. Here is the first.


The second,
Dan O'Dowd, now 61 steps out to realize his dreams of being richer than Bill Gates


Why would this matter? Because the wifi in the place where I am staying suddenly, to the surprise of everyone there suddenly stopped working. And I found an interesting wifi connection, secured, on the list. 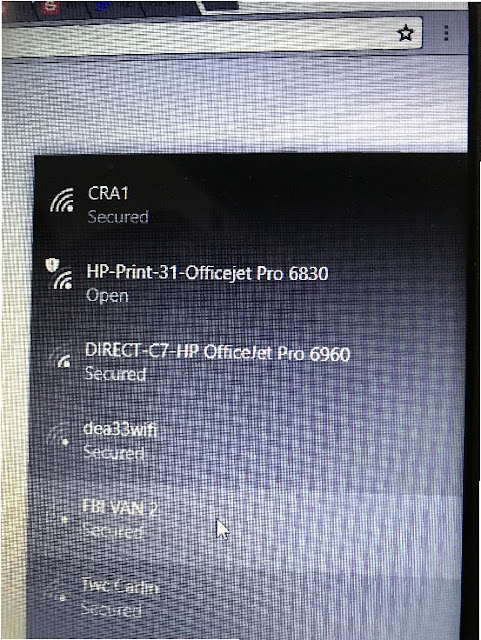 The list goes on from there for quite a ways.

Today, this suddenly reminded me of the traumatic period early last year when I was being stalked and threatened at my cabin in the Sierras.  For three months we, myself and my disabled son, endured freezing and near starvation.  You might ask why I did not get help from other people in the area.  I can tell you it was not because I did not try.  No one came.

A Look at the Neighborhood

"At 6:16 this morning these were the available WiFis on Circle Way, Cedar Slope.  Mine are Harriet and the HP-Print-88-Officejet 4630 is my printer.

This is especially interesting because no one is staying at any cabin around here - except for us.  Personally, I think both the other  routers, or other wifi devices are at the Greenfield cabin.   Greenfield Cabin 5.4 and FBI Surveillance come and go but generally travel together, appearing one after another and staying around while my AVG repair goes nuts keeping this computer operating.  Why would that be?

11:57am - Hey!  Where did Greenfield and FBI Surveillance go?  They all of a sudden disappeared.  I wonder why? 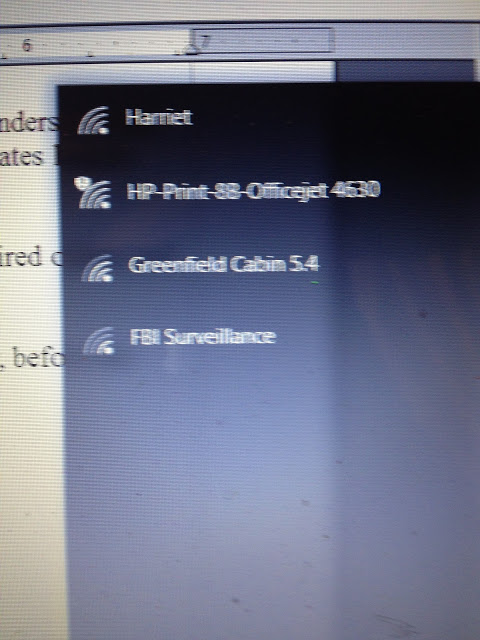 The story began much earlier.  John Greenfield had been the president of the Cedar Slope


On January 1, 2016, I fell on the black, compacted ice at the end of our driveway.  I crawled back to the cabin growing steadily colder and more sodden with water warmed by by sweat.  The distance was 100 feet, more or less.

The accumulation of snow was caused by several men in loud vehicles driving over it over and over again up into my drive way.  I had been clearing what I could before this.  Greenfield was one of those men.

Afterward, I suffered the injury, caused by these men, this was not possible.

I called two friends, who are both nurses and described the symptoms.  Independently each said it sounded like the symptoms of a hair-line fracture of my pelvis and told me adamantly to stay in bed.  Fortunately, I had a bottle of aspirin which allowed me to kill enough of the pain so I could crawl to the bathroom and feed myself and Arthur.


These posts, and the several previous to it, is from the Cedar Slope Blog. The relevant stories are linked below, for as long as the links last I have discovered someone is perfectly capable of changing links to bizarre locations and  disappearing articles. Of course, that would mean Google is involved.

Two of the 'available' wifi connections are mine.  The cabin was a half mile from any other occupied residence.   The two you see, Harriet and the HP-88-Officejet 4530 Printer, were mine.  The printer had was not set up to be used wirelessly.  The other two  are Greenfield Cabin 5.4 and FBI Surveillance.  More on John Greenfield at the end of this post.

FBI Surveillance again showed up after several days of absence

Here is my experience with him from the time he visited our cabin around 1989 on. Yep, it is true every word of it.  I think he has a lot in common with Craig, for sure.

Notice he now works for CaseText, a site I visited once, briefly, in 2015.  Thereafter, they contacted me several times offering to let me do my legal research there.  They did not request I pay for these services.

While I was enduring being boxed in at the cabin Greenfield was always looking to see me, watching him from the cabin, as he drove back and forth, compressing the snow into ice.

Now, John's career includes services to corporate clients.  These services appear to include whatever needs doing.  Could that be to act as Craig and Dan's agent in my destruction?  Given the actions taken by Craig and Dan this is a reasonable assumption.

What would it have been worth to Craig and Dan to know what I was researching?


Posted by Melinda Pillsbury-Foster at 8:01 PM