House Passes Ban on Drone Strikes Against US Citizens

From:  Before Its News

An amendment to the National Defense Authorization Act for fiscal year 2014 that will ban drone strikes against American citizens passed in the House on Friday. 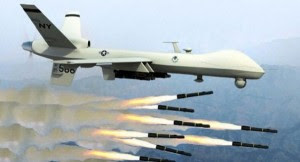 However, the amendment does contain an exception for Americans “actively engaged in combat against the United States”.
Below is the full amendment:

SEC. 12l. PROHIBITION ON USE OF DRONES TO KILL UNITED STATES CITIZENS.

(a) PROHIBITION.—The Department of Defense may not use a drone to kill a citizen of the United States.
(b) EXCEPTION.—The prohibition under subsection shall not apply to an individual who is actively engaged in combat against the United States.
(c) DEFINITION.—In this section, the term ‘‘drone’’ means an unmanned aircraft (as defined in section 331 of the FAA Modernization and Reform Act of 2012 (49 U.S.C. 40101 note)).

The 2014 NDAA now heads to the Senate.
Posted by Melinda Pillsbury-Foster at 4:16 PM