@craigcountry, Craig Franklin, is no Cowboy


From: The Cowboy: An Iconic Symbol of American History

“Courage is being scared, but saddling up anyway.” John Wayne

“The cowboy that rode across the American West helped to settle this country. He braved Indian attack, wild horses, stampedes, drowning and every other form of horrible death imaginable. The cowboy’s time came and went, but it was glorious while it lasted. While it was a period of danger and death, it was also one of loyalty and honor.
The cowboy often rode from can-see till can’t-see and faced death every second he was in the saddle. In fact, many of them lost their lives or suffered debilitating injuries. It was said one could tell a cowboy by his missing fingers or a gimp leg.
While he faced death every day, the cowboy was a man of honor, integrity and loyalty. He rode for the brand and was loyal until death. When he gave his word, he kept it no matter the consequences. Most of all, the cowboy was self reliant. He depended on no one but himself to get the job done.
The cowboy is a stereotype that transcended gender and ethnicity and encompassed all political affiliation. All cowboys and cowgirls adhered to a strict personal code that has quietly slipped away from popular American consciousness.”

The characteristics below exemplify, with the short excerpt above, the image which resides in our minds when we, as Americans, hear the word. Let me explain why it is sacrilege for Craig Franklin to present himself as a 'Cowboy.'

Courageous
Craig has no moral courage, not even understanding what this is. He turned tail, leaving his wife to face the IRS for him, retreating into a whimpering, blubbering mound of flesh who laid in bed soiling himself. See You're Not Paranoid – The IRS is out to get you.

I was married to him for twelve years. I never saw even one act of courage. He always turned tail and ran. Oh, he blustered about his courage but he kept it pristine and unused.

Loyal
Having caused all of our economic problems, put us in bankruptcy, and close to foreclosure, he turned around and plotted with Dan O'Dowd to defraud me of all marital property less than a month after I saved him while assuring Dan I would die of a heart condition. Their “Throw Mama From the Train,” strategy included Dan destroying me while Craig destroyed Glenn Hightower, Dan's partner.

This falls waaay short of loyalty. He then paid others to slander me while ignoring court orders to pay support so I could either defend myself or care for our son, Arthur, who, then suffering from a major brain injury, he persuaded to attempt suicide.

I later learned he made the offer because he did not think I could do it. When I did, it was all for him.

I stayed because I'm loyal. I believe in being loyal. If he had left decently, without his sleazy conspiracy with Dan O'Dowd to destroy me and leave me penniless, I would have been moved on cheerfully. You can't make anyone stay, and I never tried, I just cared for him as I had promised to do when I took my vows. His actions canceled any loyalty.

Craig's scheming continued as he worked his way through a list of women who he defrauded, raped, abused, and destroyed. Names and photos available upon request!

Self-reliant
Craig could do nothing for himself, either while we were married or later, according to Anne Fisher, a later long term girl friend who was with him for over eight years.

Stoic when in pain
Craig might be able to spell the word, Stoic, he might know the meaning, but he becomes a puddle of whining, whimpering sobs when faced with reality. The least little owie is treated as the approach of death. He always avoided anything which could hurt, expecting someone else to take any risks.

Craig ignored his health.  On one memorable occasion, at the Green Hills Christmas Dinner, at an upscale restaurant in Santa Barbara, he mesmerized an entire table of us as  he talked non-stop while shoveling in every course served, leaving not a crumb (no exaggeration) on the table.  His rapid-fire finger action to get every crumb was especially riveting.  The entre had a lovely sauce.  After shoveling in, holding the plate up to his face, he drank the sauce.

He always had the worst stomach aches and wondered why.

A Man of Integrity
Craig can spell the word, he has to since this is the name Dan O'Dowd choose for their software system. Neither of them understand the meaning of the word.

When he gave his word, he kept it – for life.
He keeps his word not even as long as it takes to draw the next breath. His ideas about 'love' (read this sex) include paying multiple women to be sexually available and expecting previous girl friends to find him new women for sex. He has only one use for women, who he believes should be euthanized after they pass 30, unless they are producing little girls babies, for which he does have as use.

As he said to Regina Russell, “Your sitting on your only asset.”

Finding him online presenting himself as a Cowboy was blasphemous. 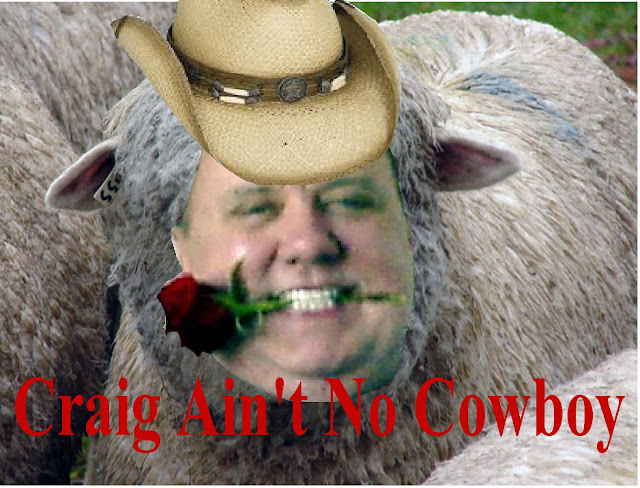 Posted by Melinda Pillsbury-Foster at 1:49 AM