The meaning of the word, Integrity.

in·teg·ri·ty
n.
1. Steadfast adherence to a strict moral or ethical code.
2. The state of being unimpaired; soundness.
3. The quality or condition of being whole or undivided; completeness.


If a man engages in a scheme to violate the law, suborning the justice system to gain power and wealth, while destroying the lives of an entire family and putting some of them at risk of their lives, does he have any claim to 'integrity?'

And what if the list of crimes the man enabled and covered for includes placing uncounted women and girls at  risk?  Paying off victims, or intimidating them into silence?

And if such a man hides behind the cloak of power to cover his crimes, what is he then?

Our country, today, is waking up to question those who have been entrusted with power.  One of the first questions to be asked is what can be proven of their integrity?  Have  they honored their obligation to follow the law, used power in ways which made all of us safer, more secure in our homes and lives? 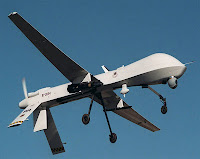 What is, instead, profits are accruing from the very means used to enslave Americans, for instance drone technology?

According to this article, "Thomas Jefferson’s Home Town First to Ban Drone Surveillance," the movement to stop drones, used domestically, is now launched.

But for those without INTEGRITY it is  all about the money, greed, and an unbridled lust for power and control.

America needs individuals who use their discernment to question what they are asked to do and the integrity to say, 'no,' even when they stand to profit.

Our institutions, government, courts, commerce, should be always in the hands of those possessing only the highest integrity.

If a man guilty of such offenses then uses the word, INTEGRITY, for his main product, what does that say about him?

The use of the word could well be an attempt to cover, even possibly, to himself, the full import of his actions.

This is the question we will be examining.
Posted by Melinda Pillsbury-Foster at 7:45 AM