All the photos used in this article are at the link above with the exception of those linked in from Laura's flickr page.


The photos from the British American Business Council for Los Angeles, Diamond Jubilee Event, are interesting and answer a question which, at the time, we failed to consider. After all, we are used to the Duke and Doxie's lies about themselves, so when they said they had attended the Diamond Jubilee in London we just rolled our eyes, knowing Alex could not even afford an attorney for his date with the Court in Las Vegas the next month.

But for this, their Graces paid, $75.00 each.  Not at all usual for a peer, who would normally attend the event at the British Consulate.  Makes one wonder whose 'list' they are on. No one NEEDED an invitation for this event.  Their Graces paid their way in, like any other pleb.

And, as it turns out, we were right. Alex was in the hands of the public defender when he confronted his victims in January and received a suspended sentence, dependent on his paying back the money from the bounced check handed over to the Speedy Car Loan  in Las Vegas.

Don't forget Alex's next appearance to update the court on his progress, coming April 15th!  If Alex proves true to form that story is far from over.


I love Alex and He Loves me! Everyone can see how close we are. People know love when they see it. We have had a tough road.
I slept in the hospitol with him for months.
Our first year of marriage....It was a very serious back injury.

Your Nuts My father and I are just fine!
BUT, My life is none of your business ever.

As you know, I married Alex for love!
We have good friends and family some are far away in Europe. Why are we your business?

To bad you try and break peoples marriages up....Jay and Morgan are great! There children are Beautiful and Happy!

Alex has never had family until now. His children were his family Wendy as she puts it in a email this year used him as her Babysitter...Wendy was just out for a BIG payday....He family lived above the Crown house resturant in Corona Del Mar California they worked downstairs...
Wendy didn't know who he baby's father was.
Alex was pressured by her. Then he married Wendy a 9 month old Pregnant woman he hardly knew because Alex was a good guy doing the right thing...Wendy was at the cowboy BOOGIE bar all the time. She didn't want to live above the Crown House resturant forever!
Really who walks around big and pregnant with no father for the baby?”

MY father sold his property he had in Michigan, It was up by The Great Charlton Hestons Propertys...My father dosent have a barn! And he wasn't a PIG farmer that was Anne Fishers Family.......YOU got us confused....I guess it was your blindness. BUT We see YOU have made a change on you lovely website! LOL your a joke!

Go get a life of your own really! Your Grandchildren need a SANE grandmother hopefully you will be able to see them before your to old...


A silence began on June 7th and continued for several days. Of course, they could have agreed to take Craig Franklin with them to the event, if he paid. Craig likes paying, that way he knows it is more likely he will get sex.

The email is yet another example of the lies these people tell with a straight face.

Look for an interesting revelation here soon, Laura!  Brace yourself, your dreams of True Love are in for a shock.

Now, back to the Diamond Jubilee.

Here is a link to Laura's Flickr page and the photo, supposedly taken in London where, the happy couple said they enjoyed the extravaganza of royalty and were warmly greeted by all and sundry, buying clothes for Ashley's birthday, which naturally, were never given to her.

The caption reads, “The Queens Jubilee, The Duke of Manchester and our Dear friend Alan.”

Notice the balloons in the background, the ceiling, and the brocade on the chairs, also the furniture.

Compare Laura's Flickr photo to this photo below taken at the Jubilee event given by the BABCLA in Westlake Village. 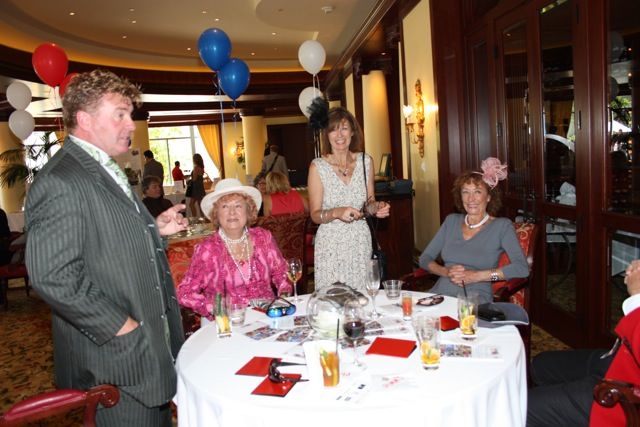 Ta-Da! It is much cheaper to get to Westlake Village from Las Vegas than to London.


This Laura Flickr photo too, shows the party location as preparations are going on.  Evidently the happy couple arrived early, so as not to miss anything.

It was taken from the second floor, visible in the photo below.  In 'Laura's' photo you can see the curve of the balcony.  It removes all doubt, if there was any. Laura posted it yesterday, again, on her flickr page, which caused us to consider this issue.

If the Manchesters were welcome in London Craiggie-poo could certainly have afforded to send them, even just using his frequent flyer miles.

It was a fantasy day, Laura said? Yes, it was, entirely. We don't doubt an invitation was issued by the British American Business Council to their entire, non-exclusive mailing list.  They probably added Alex and Laura to ensure they did not show up at the Consulate event, or, God forbid, try to crash Buckingham Palace.  Picture appears on the BABCLA site.


Oh, what a tangled web we weave when first we practice to deceive.
Posted by Melinda Pillsbury-Foster at 8:30 AM