From: Electronics Weekly
With Commentary from Melinda Pillsbury-Foster, in blue.

Dan O’Dowd, founded Green Hills Software in 1982 and has been its president and CEO ever since.
Melinda – While this is an entirely true statement it got sort of close to the wire in 1998 when O'Dowd threw down the gauntlet (read this sudden death partnership agreement), challenging his partner, Glenn Hightower, to buy him out at the amount named. The amount in question was 47 Million, I believe.
Hightower had several other companies, in fact, Dan had been working for him when he proposed they go into business together. You can read about the law suit which followed on Just the Evidence – Supplemental Exhibits, links also below for your edification.

[a.] Glenn Hightowervs. Daniel O'Dowd, Case No. BS 053127, Superior Court of the State of California for the County of Los Angeles, September 17, 1998, DECLARATION OF WAYNE B. WEISMAN FILED BY APPLICANT GLENN HIGHTOWER IN SUPPORT OF APPLICATION FOR PRELIMINARY INJUNCTION”

[d.] “Glenn Hightowervs. Daniel O'Dowd, Case No. BS 053127, In the Court of Appeal of the State of California, Second Appellate District, REMITITUR,” Copy of original order, opinion or decision entered in the above-entitled cause of July 1, 1999 and that this order, opinion or decision has now become final, signed by Joseph A. Lane, Clerk, September 3, 1999. Opinion Hightower is likely to prevail if there is proof of unlawful action by O'Dowd.

[e.]AMERICAN ARBITRATION ASSOCIATION No. 72Y 180 0960 98,” a true and exact copy of the originals that are in my possession, which is a series of documents generated by the law suit filed by Hightower against Dan O'Dowd over O'Dowd's exercise of their sudden death partnership agreement on January, 1998. Decision that unlawful action is not proved.

The timing was good for Dan. His deal with Craig Franklin for a “Throw Mama From the Train,” effort took place before the other one being thrown from train, myself, Melinda Pillsbury-Foster, knew what had hit her. Morgan P. Gell Affidavit, August 27, 2009

Craig persuaded other critical employees they should refuse to work for Hightower because it would be in their best interests to do so. Dan had a new stock option agreement, different from all other agreements, for Craig. Craig gloated about this in a phone conversation with Melinda's estranged, and strange, daughter, Morgan, who recorded it in hopes of getting more from Melinda than she had managed to get from Craig. “Morgan Pillsbury – Franklin Transcript”

On the embedded software company’s 30th anniversary he talks to Electronics Weekly in an exclusive interview.
Q. Green Hills developed the first embedded 32-bit compiler in 1983, how important was the development of this compiler for the future direction of the company at that time?

Dan O’Dowd: First of all, the compiler enabled the company to quickly become profitable.

Cross-compilation technology enabled the use of (relatively) powerful workstations for development.  Providing the first optimising embedded systems compiler made programming languages practical from a performance perspective.

Compiler technology continues to be a foundational component in our solutions. In many industries, the performance and reliability of the compiler-generated code remains critical.
Melinda – Actually, they made no sales and were headed toward negotiating more funds from Glenn Hightower, their VC and Dan's previous boss, until Craig Franklin, ignoring Dan's lousy marketing material, directly read the code and recommended the program to several associates. This is why Dan knew he had to have Craig, 'onboard.' Craig was offended when he discovered Dan did not want him for his coding and tech skills but for, gasp, marketing. It took time, but Craig learned the job.
Notice flat line below until Craig comes on board in 1986. Notice huge leap in 2003. More on that later. 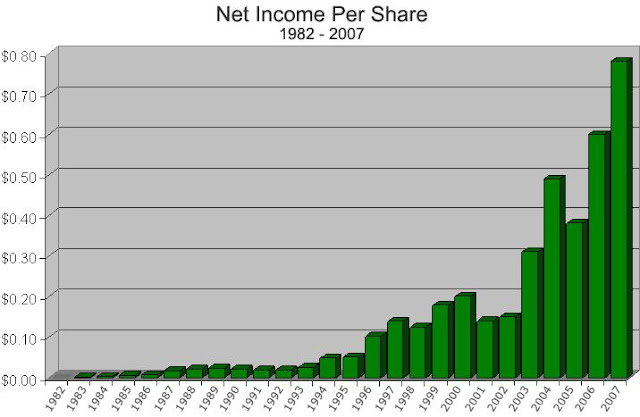 Q. What were the main market and technology triggers for the company’s development of first the MULTI graphical integrated development environment (IDE) and INTEGRTY real-time operating system (RTOS) in the 1990s?
Dan O’Dowd: The graphical debugger for embedded systems was borne of our own need. Command-line debugging was state-of-the-art, but developing a sophisticated program like a compiler with this approach was pathetic.

As software developers, we envisioned, and then realised (sic), monumental productivity increases by interacting with screenfulls (sic) of code and modern HMI controls like clicking and scrolling – such as for breakpoint setting, viewing information, browsing code and data relationships – instead of a single line of code visibility and typing.

In the early 90s, we also envisioned multi-language, multi-core, and multi-thread debugging, which is why we called it MULTI.

In the late 90s, we created INTEGRITY to help developers manage the growing software complexity executing within embedded systems.

At the time, the embedded world was dominated by flat-memory model RTOS products – VxWorks, pSOS, VRTX. We knew that modern microprocessors, with their memory management features, could enable the best kind of operating system and the best system architecture for our customers: modular systems built on a high assurance microkernel foundation, with strongly isolated components and well-defined interfaces between them.

What’s amazing is that many embedded projects still use monolithic architectures, even some with millions of lines of code running in a single address space. One bug and the entire system is toast.

Yet the electronics world is slowly but surely evolving; case in point: retrofitting the INTEGRITY microkernel below Linux, Android and Windows, using virtualization techniques, for improved security and availability in a wide variety of electronic systems.
Q. How important to Green Hills was its strength in the high-reliability software market and the DO-178B Level A certification of INTEGRITY in 2002.
Dan O’Dowd: This certification and then our Common Criteria EAL 6+ security certification in 2008 were industry landmarks because they demonstrated that an operating system, can meet the very highest levels of safety and security if designed properly from the beginning to do so.

The DO-178B Level A certification was the first time an avionics developer used a commercial (not home-grown) partitioning RTOS for the most critical systems aboard an aircraft.

Furthermore, we built an experienced certification services team, including former FAA certification authorities, so that we could not only achieve excellence in certifying our own products, but also to offer our customers assistance in incorporating our technology and certifying their own systems.
Q. What would you identify as the technology development of the last 30 years that has been most important to Green Hills?
Dan O’Dowd: The INTEGRITY development transformed the company, dramatically increasing its product depth and has enabled it to pursue new markets, such as the enterprise desktop/laptop/mobile markets and automotive infotainment, where a combination of multimedia functionality and Internet connectivity is often coupled with critical services, such as security, safety, or real-time applications that are simply impractical for general purpose operating systems.

Hardware trends, in particular multicore, favour such mixed criticality systems.
Melinda – Dan fails to give appropriate credit to the assistance rendered to John Fund in 2003. John hs many friends who saw in Dan a real asset, in more ways than one. More on this at another time.
Q. If you had to name one product that “defines” Green Hills as a technology company which would it be?
Dan O’Dowd: INTEGRITY.
Q. What technology challenges and opportunities do you see ahead for the company?
Dan O’Dowd: The biggest challenge is legacy and inertia. As I mentioned earlier, there are plenty of electronic products that aren’t taking advantage of modern hardware and software techniques due to the weight of their legacy code bases.

Furthermore, government electronics safety and security certification requirements are, with few exceptions, far weaker than they could and should be. This not only leaves our critical infrastructure exposed to hackers, but it also acts as a disincentive for developers to change.
Melinda – Those hackers, like Anonymous, are a problem for Dan's clientele.
Posted by Melinda Pillsbury-Foster at 5:18 PM