Anne Fisher sent me a forward. It seems by 2007 Craig had entrusted her with the job of vetting his potential dates and so handed over his account information to a multitude of Sugar Daddy sites, where Craig trolled for women.

This raises as many questions as it answers. Why would someone supposedly looking for their 'true love,' be looking on a sugar daddy site in the first place? These are thinly frosted hook up spots for older guys who want paid sex.

Now, this is my opinion,but it is an informed opinion as I have now been studying Craig's appalling behavior for quite some time now.

Let's begin with a story from soon after Craig left me. He was introduced to a respectable woman and asked her out to dinner. Craig took her to a very high end restaurant in Santa Barbara and brought along a present, nicely gift-wrapped, he had picked out just for her. When she opened it she found very suggestive, but expensive, under garments. Craig had made his intentions clear.

The woman excused herself to go to the ladies room and, I am told on good authority, climbed out the window, much to Craig's chagrin and outrage. “What was wrong with her,” he later asked Morgan, who told me the story with glee.

Regretfully, no exit interview could be undertaken, though if the woman in question reads this, please get in touch. Your anonymity will be respected and a more thorough treatment would be interesting to all.

Craig, on the prowl, now believing he could get away with anything because of the whole-hearted support of Dan O'Dowd, was outraged. What was wrong with these woman, he asked Morgan?

Craig believed women would automatically fall into bed with him and do his will.

Anne also told me Craig began trolling for women, the more normal respectable kind, online on such sites as match.com. This is, she said, where he met her.

Craig expressed his anger toward normal, respectable women by persuading any number of these unsuspecting ladies to meet him, at his expense, in Santa Barbara for a Get-To-Know-Your-True-Love Weekend.

The credulous damsel would be raped and put back on the plane. Craig carefully picked women who were not particularly attractive and without familial support. Dan O'Dowd had, in case you missed this, set a serial predator in motion.

Anne told me she reported this to the police but since she did not have the names and contact information for the victims, nothing was done.

Dan O'Dowd finally got tired of complaints from Amy when Craig began bringing one, two or other numbers of sexual professionals to Green Hills Events, which also included the families of other employees.

Craig the Wanna-Be Womanizer then found recourse to Madams, who naturally supplied girls who knew what was expected and Sugar Daddy sites, where the same is true.

While it was undoubtedly Dan who set of the Sexually Supercharged Craig other Green Hills employees were well aware of what was going forward and also took no action. 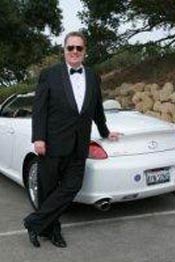 Not that Craig was any kind of a stud, more a muffin, but certainly highly given to fantasizing, as you see in this photo of him in a tux, strutting his stuff, next to his convertible Lexus.

The photo was taken between liposuctions and various other expensive interventions for improvement of his appearance.  Craig is generally obese.

The email below is about one of the women Craig met on a Sugar Daddy site who aged out of his preferred target area (under 30) after several years of being supplied with money in exchange for sexual favors.

Note that Craig is not preying on women and girls in Laguna Nigel but using the same email address - craig@ghs.com

If you are a Sugar looking for a Daddy on one of these sites please note he requires you to sing and his exit from the 'relationship' will include destroying you financially.  That is the part which really turns him on.  More soon on his prior 'relationships.'

a present for you *


If you want to see what Ivory does nearly every day, go to www.sugardaddie.com and login as me (richsongwriter, password 999999.  Click on my HOTLIST and scroll down until you see her screen name: GODDESS.  She’s on nearly every day now.  Lookin’ for somethin’, I don’t know what.

Posted by Melinda Pillsbury-Foster at 3:49 AM