From:  Military and AeroSpace Electronics

COMMENT - As story lines continue to converge and events in Boston promise ever more profits to the drone industry, also does the count down to the  June 7th pre-trial hearing of corporate legal savant Jack Douglas, is is Vice-President of Green Hills Software, begin.

Douglas is facing charges of lewdness, Open and Gross, c272 S16 (272/16) in Taunton District Court.  Please let us know if you can be there to report in person on what takes place.

Douglas was already well known in legal circles for his article,“ReebokRules.”  It is likely his renown will be substantially increased, both in the general public and in the drone industry soon.

Questions have been raised as to why Douglas, who works in California, was in the Boston area at the time.  Douglas does not appear to have been participating in the official aspects of the Boston Marathon.  Did Green Hills business take him there?

As of yet, no answers are forthcoming. 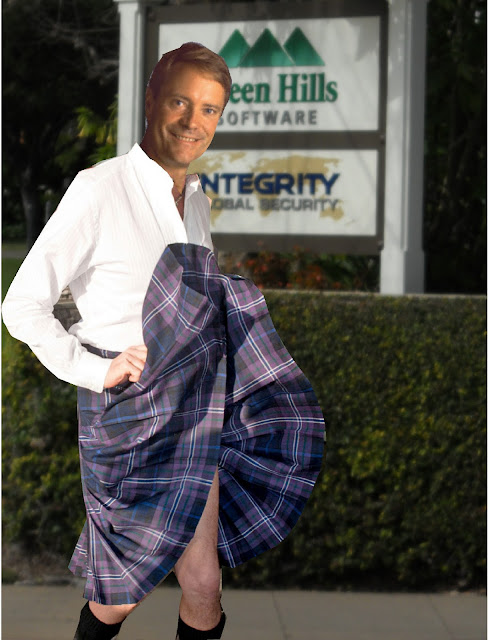 Multicore TimeMachine enables software developers to visualize, replay, and debug their software's execution backward in time across several cores within an SoC.
The TimeMachine suite enables firmware engineers to find bugs and inefficiencies in multicore systems. As part of the Green Hills Software MULTI integrated development environment (IDE), this capability enables developers to eliminate multicore bugs.
The TimeMachine debugger enables the user to step forward and backward synchronously on all cores to set software and hardware breakpoints and to run forwards or backwards to stop all cores synchronously on hitting the breakpoint.
Developers can optimize their programs through profiling information derived non-intrusively from gigabytes of trace data. Beyond debugging, confidence for completeness in testing can be obtained from code coverage data also derived non-intrusively from the trace data, company officials say.
For more information contact Green Hills Software online at www.ghs.com.
Posted by Melinda Pillsbury-Foster at 8:02 AM