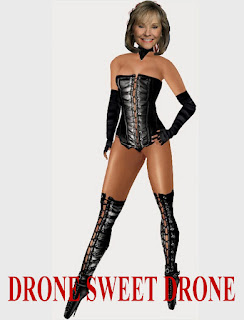 COMMENT -  Sad to state, the great state of Oklahoma has been struggling to eliminate drones from their skies and lives for some time now and meeting with less success than many areas because their vixenish, blond, governor is determined to keep those exciting machines coming, and coming, along with the cool cash which accompanies them.

You would think the revelation in this article from Opposing Views would have had some impact, dampening ardor for these sleekly expensive machines of mass control and surveillance.  But no, they are still on fast forward in Oklahoma.

So, we are happy to introduce Mary to our audience, if you had not previously followed her political career.

By Dabney Bailey, Wed, April 10, 2013
The U.S. government is testing drones that are a civil rights double whammy – not only can they spy on you from above, but they can also determine whether you’re carrying a gun.
The drone will be able to "distinguish between unarmed and armed (exposed) personnel." Citizens carrying around an assault rifle or a holster might send up a red flag, but people with concealed weapons will evade the drone’s gun-seeking camera.
The Oklahoma Training Center for Unmanned Systems, a unit of the University Multispectral Laboratories under Oklahoma State University and Anchor Dynamics, has been performing research with the new drone. They hope to eventually employ the drone to aid first responders and frontline homeland security professionals in search-and-rescue missions, radiological and chemical emergencies, wildfires and “to catch the bad guys.”
The Department of Homeland Security’s chief privacy official assured the public that the testing would not violate any privacy issues, but that may not do much to ease the concerns of gun rights and privacy advocates. Testing may be harmless, but what about the eventual application?
Attorney David Slane said: “The general application of helping people in a rescue situation or a lost child – great. But that doesn’t mean that we should be giving up our privacy rights.” Military consultant Toney Stricklin added, “We don’t want to do anything that infringes on an Oklahoman’s privacy because that would be infringing on our own privacy.” The DHS added that the program “is not linked to any intended procurement action, nor does it imply intent to initiate such action.”
It will likely be hard for gun rights advocates to accept these assurances. Gun rights, privacy and distrust of the government often fit together like three pees in a pod, so a drone that infringes on both of those rights while giving more power to the government is sure to ruffle some feathers.
Gun rights advocates may have to put their hopes in the Oklahoma courts because they are in the unique position of being able to address the privacy concerns of citizens. Their rulings – if they make any – could potentially shape domestic drone laws on a federal level.  MORE and VIDEO
Posted by Melinda Pillsbury-Foster at 7:44 AM