COMMENT - On one level the point raised does not matter, as in each instance those entrusted with power are acting outside the confines of the Constitution and as agents of the corporations which control the infrastructure of government today.  The covert take over by corporations results in violations under color of law and opens up charges for treason and war crimes for all involved.  These are issues which cry for resolution and a return to the foundational role of the people as the government in America. 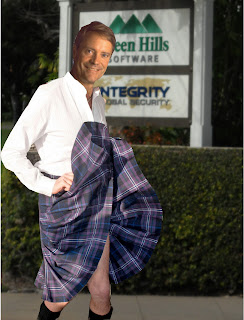 And while there is a difference between charges of indecent exposure and treason this does lead to the question of, what Douglas Tartan pattern will Jack be wearing to his pre-trial in Taunton, MA on June 7th?

About three and a half years ago I wrote that "One might note that with regard to future battlefields the use of contractors is like the use of robots. They promise both greater cost-effectiveness and less loss of life of government soldiers."
With the advantage of hindsight it turns out that the use of robots is heavily dependent on the use of contractors. It seems that today's Terminators, such as unmanned aerial systems (UAS) -- drones -- are heavily dependent on mere mortals.
Perhaps that should not come as such a surprise. After all, anyone who ever saw Arnold Schwarzenegger act in the Terminator movies understands how much he depended on the abilities of others in order to produce a successful movie.
Still, the extent to which today's contractors are involved in maintaining and operating the U.S. premier robot system, aerial drones, will likely come as a surprise to you. It certain did to me after reading the article, "Drone-Sourcing? United States Air Force Unmanned Aircraft Systems, Inherently Governmental Functions, and the Role of Contractors," published last month in George Washington University's Federal Circuit Bar Journal.
The author, Captain Keric D. Clanahan, who serves in the U.S. Air Force Judge Advocate Generals Corps, makes some points which are, pardon the pun, deadly serious, and deserve some thoughtful consideration. To wit:

"In the decade-long conflicts in Iraq and Afghanistan, the United States has used military troops, federal civilian employees, and private military contractors to sustain and perform UAS missions. Now, after the end of the war in Iraq and entering the twelfth year of war in Afghanistan, we must ask: Exactly what jobs are individuals performing in UAS operations? Who provides logistics and maintenance for unmanned aircraft? Who performs video and imagery analysis? Which individuals operate drones on strategic intelligence, tactical intelligence, and targeted strike missions? And, most importantly, if private contractors are supporting UAS missions, are they performing tasks that should be reserved exclusively for government personnel?"

Ah yes, "inherently governmental", two words that continue to bedevil government contracting with little resolution in sight. Suffice it to say that the U.S. government has yet to produce a comprehensive catalog of activities that must be performed by the government.
It is very much worth pointing out that contrary to popular perception drones are hardly unmanned systems. According to Clanahan, "It's important to recognize that a medium or large unmanned aircraft is only a single component of a complex system that involves U.S. based grounded flight operators, sensor operators, communications technicians, and imagery analysts; fielded forces and personnel directing takeoff, landing, and recovery procedures; and forward deployed maintenance and logistics crews keeping the aircraft and payload (sensors, camera, radar, and armament on the aircraft) mission ready."
How many people are involved?

"A single Combat Air Patrol ("CAP") mission for a Predator or Reaper demands approximately 160 to 180 personnel to complete the 24 hour mission; the more complex Global Hawk system requires between 300 and 500 personnel--human capital requirements are adjusted depending on the intelligence capabilities required for the mission. From the 6 CAPs that were being performed in 2004 to the 69 CAPs that are planned for 2013, the Air Force is experiencing a 1,200% growth in UAS missions in less than ten years."

One wonders if those are the sort of "high-skill" jobs Mitt Romney is planning to create, if he is elected, or the ones Obama includes when he talks about the ongoing economic recovery.
You are probably asking why any of this is a problem. After all, as Clanahan writes, "Fewer pilots flying the skies means fewer reports of downed airmen. The American public does not shed tears when a drone goes down in a fiery crash." After all, nobody regards maintenance and repair functions as inherently governmental activities.
He answers that question this way:

"Weapons systems maintenance, nevertheless, could be regarded as a critical function, that is, "a function that is necessary to the agency being able to effectively perform and maintain control of its mission and operations." While such positions may be filled by government or contractor personnel, agencies must retain sufficient internal capability to maintain control over the mission and operations through (1) an adequate number of "[f]ederal employees with appropriate training, experience, and expertise" and (2) internal ability to oversee and manage the contractor workforce."

Drones however do more than just fire missiles at targets. They are also heavily used for gathering intelligence. And that is at least a potential problem. Exactly who can perform intelligence activities for the U.S. government is a long debated question.

"According to a paper released by the Office of the Director of National Intelligence ("DNI") on July 19, 2010: The Intelligence Community does not condone or permit contract personnel to perform inherently governmental intelligence work, as defined by OMB Circular A-76 . . . . Core contract personnel may perform activities such as collection and analysis; however, it is what you do with that analysis, who makes that decision, and who oversees the work that constitute the "inherently governmental" functions.
Conversely, many scholars opine that participation in intelligence collection, particularly tactical intelligence, constitutes direct participation in hostilities, a status reserved for combatants under international humanitarian law and laws of armed conflict. Because of this possible link to a combat role, many scholars view tactical intelligence as inherently governmental."

Clanahan judges that The Air Force appears to have adopted a position similar to that of the Office of the DNI, but is not nearly as dependent on contractors for intelligence activities and thinks one can conclude "that the Air Force is making a conscious effort to retain control over intelligence-analysis activities, and is keeping contractors from engaging in inherently governmental activities.
But it is not hard to see how things could turn bad. As a cautionary danger, Clanahan notes this incident:

"A recent Air Force investigation of an erroneous drone strike in the Uruzgan Province, central Afghanistan, raised questions concerning the possibility of inappropriate use of contractors for tactical intelligence and target identification. In February 2010, Hellfire missiles, launched after a "positive identification" based on drone intelligence monitoring, killed fifteen Afghan civilians, and injured at least a dozen more, travelling in a three-vehicle convoy near U.S. special operations forces who were conducting a capture mission. Investigations into the miscalculated decision to strike revealed that although the drone was operated by military personnel, and the decision to fire was made by the ground force commander, the decision was largely based upon intelligence analysis being conducted and reported by a civilian contractor. Arguably, this reported contractor activity should not be viewed as inherently governmental since it did not involve "direction and control of intelligence" or final decision making, but should at least be considered very "closely associated with inherently governmental [activities]," namely, the decision to strike--i.e., to engage in offensive combat.... Nevertheless, the Air Force must always remain cautious of contracted intelligence activities where civilians may exert a significant amount of influence or control over targeting and weapons release decisions. It is imperative that the Air Force prevent contractors from getting too close to the tip of the spear."

There is one aspect of contractor involvement in drone activities that may violate current Federal policy.
Currently, small tactical drone operations seem to be the only Air Force UAS mission where military members are not always in operational control of a military aircraft. The Air Force currently employs three types of small tactical UAS: the Scan Eagle, RQ-11B Raven, and Wasp III. Although the Air Force owns these aircraft, which are utilized by troops in theater, contractor personnel have also operated such drones.
The drones' principal use is to feed data to troops to plan force protection and special operations missions, or possibly to provide direct strike capability. Therefore, the technology should be regarded as capable of combat operations or very closely associated with the inherently governmental function of combat.
According to the Office of Federal Procurement Policy:

"When an operator remotely pilots a drone to an area for the purpose of engaging an adversary using UAV-delivered munitions--collecting intelligence that will be delivered to combat forces currently engaged in hostilities, or gathering and delivering intelligence data to troops facing circumstances with "significant potential . . . to evolve into combat"--the drone operator's activities mirror the security activities described above. UAS operations involve situations with a foreseeable likelihood that an intelligence mission could quickly erupt into combat operations. As such, because of the principle uses of small tactical UAVs in the theaters of military operations, the Air Force should regard such operation of UAVs as inherently governmental and prohibit mission performance by contractor personnel. So long as the Air Force adheres to a practice of only allowing military personnel to serve as aircraft pilots of medium and large category UAS, then flight of these aircraft adheres to current policy provided in OFPP Letter 11-1 and DODI 1100.22. If the Air Force has continued its former practice of using contractor-operated tactical UAS in theater, then such a practice very likely violates current OFPP policy and DoD Instructions."

To keep things kosher when it comes to drone use Clanahan recommends the following:

"To ensure that the military does not outsource such roles to a contractor workforce, Congress should: (1) statutorily restrict select UAS activities from being contracted; (2) order the development of regulations governing procurement of unmanned systems and technical support; and (3) establish appropriate transparency and accreditation regimes. To support Department of Defense ("Defense", "DoD") efforts to eliminate inappropriate contracting of UAS activities, Congress must provide the military with the manning allocations and training budgets needed to develop a skilled cadre of federal employees (albeit, predominantly military) to fulfill the entirety of the UAS mission."  MORE

Posted by Melinda Pillsbury-Foster at 7:50 AM