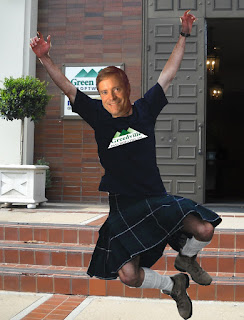 COMMENT - Once someone starts a fad, everyone has to join in.  Of course, with so many exciting announcements coming one after another, each guaranteeing a flood of profits to the company located at 30 W. Sola in Santa Barbara, we wanted to know the mood which today permeated the Green Hills campus in the wake of the announcements for increased use of drone technology in the military.

Unable to make contact with anyone via the phone or Internet we sent a photographer down to Green Hills who stationed himself to ask for reactions as members of the Dream Management Team exited the building for lunch, coffee, of the like.

We were unable to catch Dan, as he ran too fast, and of course, Craig is settling into his life at a slightly southern location in Laguna Beach, rumor having it he has run off with either one or both of the Duke and Duchess of Manchester, who are to act as his French Maid and Chauffeur, as he continues his life of open debauchery.

We did manage to catch this reaction from John B. Douglas, III, however.  Presumably, John, also known as Jack, is also busy preparing for his June 7th Pre-Trial date in Taunton, MA, for  a single count of open and gross lewdness and lascivious behavior.  POLICE REPORT