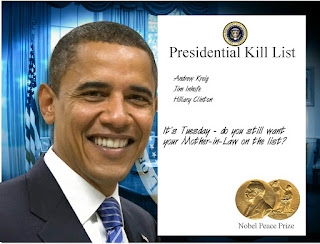 COMMENT - Well, this will change those Tuesday Kill List meetings just a touch.  Since killings can take place far from the battlefield and killings on American soil are not disallowed Obama's Tuesday Wish List can look like this.

He might even help out his friends in t he corporate world by 'eliminating' their inconvenient competition.


Proposals to vet future US drone strikes risk creating "kill courts" according to human rights campaigners who say Barack Obama's promise of new legal oversight does not go far enough to end what they regard as extrajudicial executions.

The president has asked Congress to consider establishing a special court or oversight board to authorise lethal action outside warzones under a new counter-terrorism doctrine which he says will end the "boundless war on terror".

But responses to his speech from leading campaign groups, though broadly welcoming, highlight how little change Obama is proposing to the underlying principle that the US has a legal right to kill suspected terrorists abroad without trial.

In his speech on Thursday, Obama suggested that in the future drone attacks would be limited, and that they would be carried out primarily by the US military rather than the CIA.
Obama said that US military intervention abroad did not guarantee the safety of Americans at home, and often fomented extremism. "A perpetual war – through drones or special forces or troop deployments – will prove self-defeating and alter our country in troubling ways," he said.

But he defended his administration's decision to launch hundreds of such strikes in recent years, insisting they were more discriminating than other military options such as aerial bombing and had helped prevent terrorist attacks.

Obama also said he would ask Congress to review his proposal for future drone strikes to be subject to court review or an independent oversight board.

"The establishment of a special court to evaluate and authorise lethal action has the benefit of bringing a third branch of government into the process, but raises serious constitutional issues about presidential and judicial authority," he said.

Zeke Johnson, director of Amnesty International USA's Security with Human Rights Campaign, said: "What's needed on drones is not a 'kill court' but rejection of the radical redefinition of 'imminence' used to expand who can be killed as well as independent investigations of alleged extrajudicial executions and remedy for victims.

"The president was right to call for repeal of the 2001 authorisation for use of military force, but he doesn't need to wait for Congress to act on this. He can unequivocally reject the 'global war' legal theory today, once and for all, and put an end to the indefinite detention, military commissions and unlawful killings it has been used to justify."

This view was echoed by the American Civil Liberties Union, which welcomed new restrictions against so-called 'signature strikes' on suspicious groups but warned the notion of legal authority for targeted assassinations remained deeply flawed.

"To the extent the speech signals an end to signature strikes, recognises the need for congressional oversight, and restricts the use of drones to threats against the American people, the developments on targeted killings are promising," said ACLU director Anthony Romero. "Yet the president still claims broad authority to carry out target killings far from any battlefield, and there is still insufficient transparency. We continue to disagree fundamentally with the idea that due process requirements can be satisfied without any form of judicial oversight by regular federal courts."

Both groups also urged the president and Congress to do more to shut the Guantánamo Bay detention centre and expressed concern about plans to seek a US location for military commissions rather than try detainees in civil courts.  MORE

Posted by Melinda Pillsbury-Foster at 11:18 AM