US robots, Israeli drones to help make 2014 World Cup in Brazil 'one of safest sporting events ever' 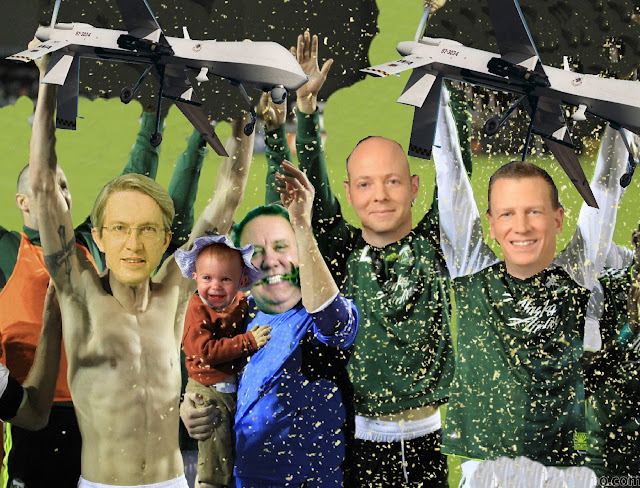 Brazil has added 30 US military robots to the Israeli drones and 'Robocop-style' glasses with face recognition cameras to its arsenal after the country allocated $900 million to make 2014 World Cup "one of the most protected sports events in history."
The 30 PackBot 510 units, which usually cost between $100,000 and $200,000 apiece, will arrive in Brazil as part of the $7.2 million deal the country signed with American iRobot advanced technology company. The contracts include services, spare parts and associated equipment.

“IRobot continues its international expansion, and Brazil represents an important market for the company’s unmanned ground vehicles,” Frank Wilson, iRobot’s senior vice president, said in a statement. “IRobot is excited to be providing the company’s state-of-the-art robotic technologies to Brazil as the country prepares for several high profile international events, including the 2014 FIFA World Cup.”

The first real test for the PackBots will be the visit of Pope Franics to Brazil this July, with the country also looking to use the robots during the Rio Olympics in 2016.

The PackBots are equipped with cameras and are operated remotely in order to detect and examine suspicious objects or explore dangerous environments, while keeping their operators safe from harm.

The devices weigh about 27 kilogram and rely on caterpillar treads to move around, using videogame-style hand controllers to make it more familiar to the users.

A man walks next to a mural depicting "Fuleco", the mascot of the Brazil 2014 FIFA World Cup.(AFP Photo / Christophe Simon)
More than 2000 of those military robots are currently stationed in Iraq and Afghanistan, with PackBots being the first to enter the damaged Fukushima nuclear plant after the 2011 earthquake and tsunami.
Brazil is spending $900 million to bolster its security forces, including high-tech surveillance equipment and helicopters, as the country is hoping to make the 2014 World Cup "one of the most protected sports events in history."

A Brazilian military police officer scans a stadium using facial recognition technology.(Sao Paulo Military Police)
The country’s police will be equipped with facial-recognition camera glasses that can capture 400 facial images per second to store them in a central database of up to 13 million faces.
Brazil is also reported to have spent $25 million on four Israeli-made drones, which are expected to make their debut at the FIFA Confederations Cup in June.
There’ll also be plenty of manpower involved in the security operation as the World Cup organizers plan have 3,000 to 5,000 soldiers from the Brazilian Armed Forces at each of the 12 host cities during the event.

Posted by Melinda Pillsbury-Foster at 8:23 AM